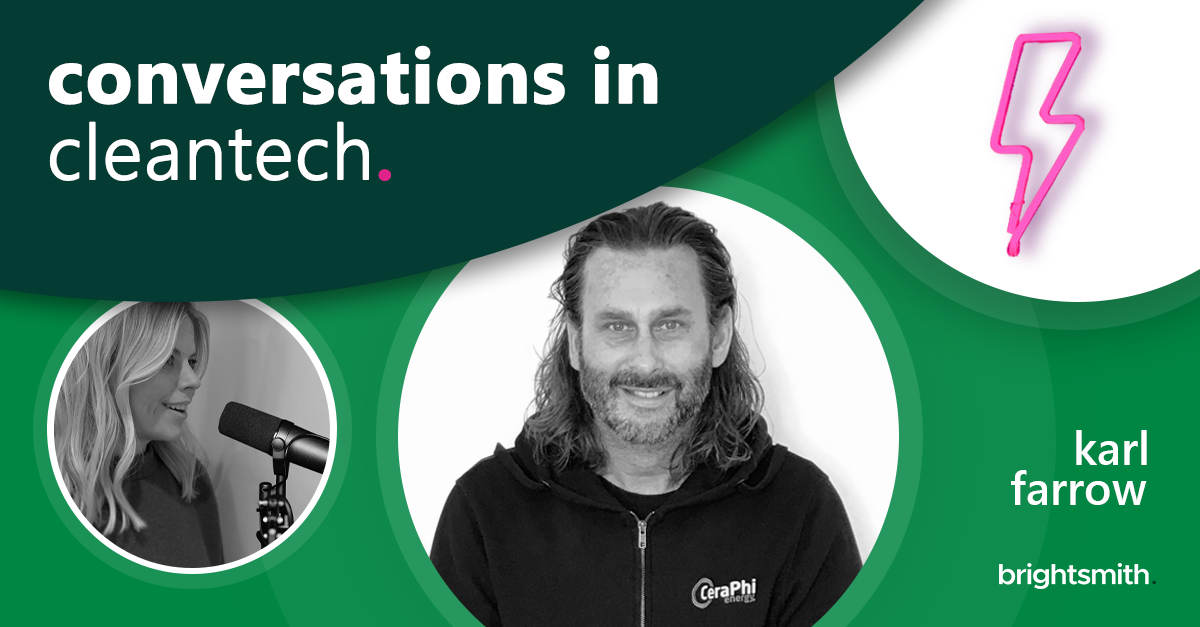 Karl Farrow is the founder and CEO of CeraPhi Energy, whose vision is to unlock the power potential of geothermal energy. With the expertise of oil and gas industry veterans, CeraPhi’s goal is to lead the geothermal revolution by providing a decarbonising baseload 1-2-1 energy transition solution

Before working in cleantech, Karl gained a wealth of understanding of the international energy sector - an entrepreneur and innovator with more than 30 years of experience, Karl gained the majority of his knowledge in oil and gas production. however, he came to the realisation that by tapping into his expertise and living his purpose, he could help realise the potential of the world's cheapest, cleanest, and most efficient baseload 24/7 energy.

Read on for Karl’s key insights and, be sure to listen to the podcast in full here.

The 101 Guide on geothermal

Geothermal really is an unknown, scalable solution with long term benefits for fighting climate change, something that has really driven me and other members of the company to do what we've done.

Geothermal has been around for 1000s of years, and there have been many historical instances of heat from the ground in water that has been brought up to the surface and been used in an open environment for heating and other forms of use.

It has been available commercially at scale from the turn of the century, back in the 1900s. But today, over 100 years later, we're still around 15 gigawatts commercially installed, which when you look around the world at wind and solar and other forms of renewable, it's pretty minuscule.

Everywhere we go in the world, you can access thermal energy from the Earth's core, something I know coming from an oil and gas background and having been involved with multiple products around the world in different countries. There are millions of wells drilled around the world in oil and gas, and from the over 150 years that oil and gas have been around, we know is that the deeper you drill the hotter it gets, and in certain places, it is hotter than others.

Historically what's been done is looking for specific environments within the geology of the subsurface, are you looking where water connects with hot rocks etc and creates a natural steam to produce energy. However, our approach is slightly different.

We thought if you can get to the heat, you can induce the liquids to create the energy and that's really what you know, our philosophy and our sort of drive for bringing this massive energy source to the abundance of the population in the world and once you do produce it in a scalable manner, you don't only have the benefits to produce electricity, you also have the benefit of using the heat directly which can be used for district heating it can also be then used for cooling through chillers that can then be applied to multiple areas of desalination and things like water treatment.

It has multiple scalable uses from high temperature to low temperature and heat. So, it can be used for large scale heating networks or industrial processes, but then the lower temperatures can be used for things like climate size agriculture. So, it does really provide a holistic approach to global economic benefit and scale for clean energy. And that's really where we’ve kind of come at it from, to try and spread that word, get it more openly known and get people to adopt it as part of their sort of clean energy transition and energy goals.

What is the long-term mission of CeraPhi?

What are the biggest challenges CeraPhi faces?

The biggest challenge is getting people to understand and be an advocate for the geothermal space to lobby the support behind doing it.

At the end of the day, the energy, the heat is everywhere. And if you get to the heat, the temperature, you can create the energy.

But I think we've just got to go get away from that mentality, that there are only place we can do it. You know, the UK isn’t California, where there are geysers, and stuff coming out the ground, but you don’t have to be California to create the energy. So, it's really a case of, yes, its low hanging fruit. why not use it, it makes perfect sense but it’s not the only source.

We have projects in the UK, which have been going on for several years now - they're not the same principle of projects in California, but they will produce energy. And these projects are proving the point that you can do geothermal even in places like the UK. And that's our goal in the next six to 12 months, is just to show that it can be done anywhere, i.e., in the UK, it can be based on an oil and gas industry, and then we can then export that expertise globally. Our goal is also to make sure it’s not just an oil and gas expertise that has got great project management and delivery expertise in the country, but we can transition those skills into clean energy to help make an impact.

What is one of the biggest things you’ve learned since founding CeraPhi?

Unlike a lot of other sectors or areas where people start a new company, we are dealing with some novel approaches and there are no benchmarks really out there. We can’t say “well this looks good because that’s how Simon did it all”. So, there is that pioneering aspect, and that's, very much where we are.

For that reason, it's natural that there's going to be times when you say we could have done that a bit better, or it would have been better if we did this - but if you don't do it in the first place, you don't know.

I think that's one thing I think we have brought to the table in this space that hasn't been there in any of the projects I've really looked at. There is the oil and gas health and safety mentality, where you take risks, but everything's calculated in a way where there's no impact to personnel, environment, equipment, etc. And you can do it in a way where it's all measured and modelled in a very specific manner.

However, what is important to us is that fail-fast mentality, where you can see when something is not going to work and you can decide quickly and say stop that, leave it but learn from it and just move on and do something else. And I think that's again, where we need to be in this space if we're going to make impact results, we need to fail fast and make sure that we move on to what else could work.

Enjoyed this article? Listen to the full podcast here, check out CeraPhi’s website and connect with Karl on LinkedIn to follow his journey within the geothermal industry.